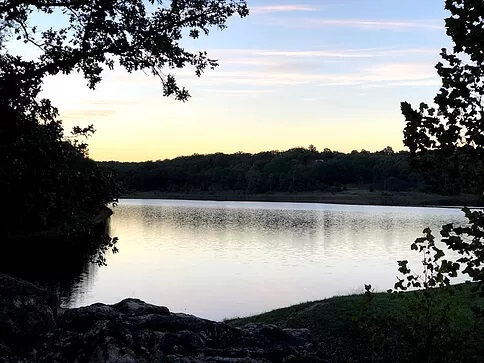 We ended up staying at Lost Valley Lake Resort in Owensville, Missouri overnight and man, I wish we could have spent more time here. They had amenities that I would’ve never thought a campground would have. There were even horse stables and even a salon. I really wished we could stay there longer. The kids did get to play on the jumping pillow though and had such a great time. The grounds were kept so nice and because it was in the woods it was so quiet. 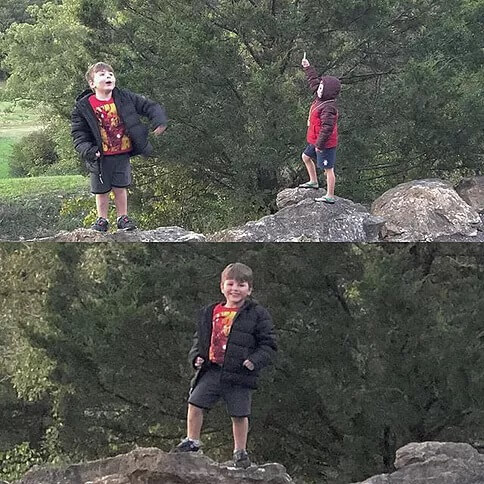 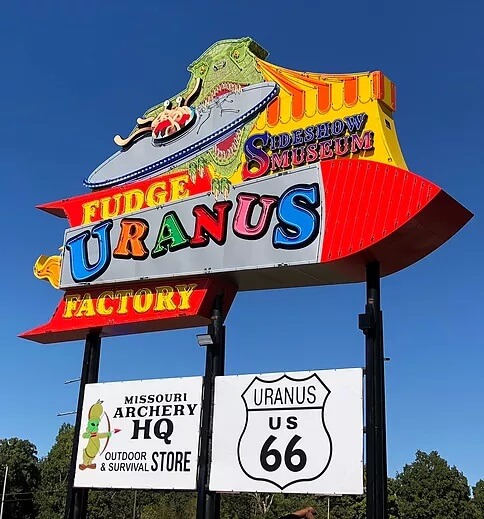 On our way to Branson we found this gem along the side of the road. If you have never been to Uranus, Missouri then folks you have got to go! And when you do go you have to go to Uranus Fudge factory and Gift shop but you have to make sure you bring your sense of humor with you because there are so many jokes to be said and I can assure you you don’t want to miss out on any of those. 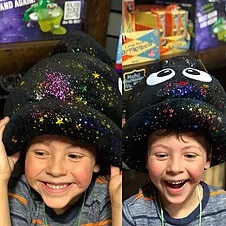 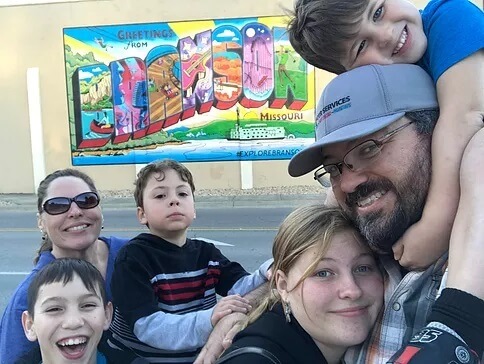 We stayed at Treasure Lake Rv Resort in Branson and loved it! It was super close to everything and had so much to do. There were small ponds to play and fish in. There were several playgrounds to play at. Many restaurants and all the shows were soo close by. The restaurant that was in the campground offered nightly meals as well as meals on the weekend. 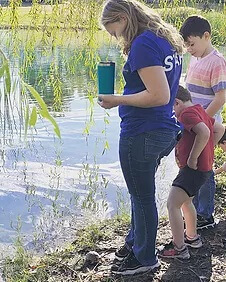 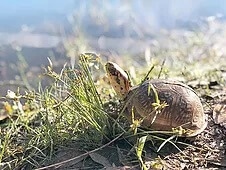 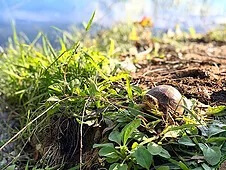 While at the playground near our campsite the kids found a sweet little turtle. We think that its a snapping turtle. We couldn’t take it home so we let him go and he was quite happy to go back to play with his friends in the pond. Steven named him Turtley the turtle. He did linger for a bit and he crawled over the kids shoes. They really thought that was cute.

While we were here Alima and I decided to make cookies again. This time we made sugar cookies. They would have been great but I decided to put food coloring in it to make them purple, well that turns everyone off but guess what we ate them anyway! 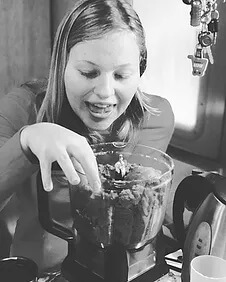 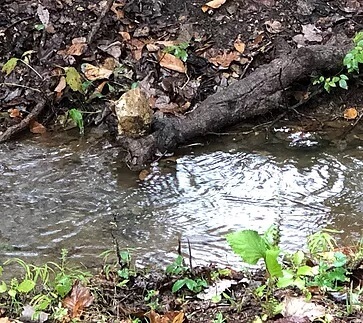 Let me talk to you about grocery stores for a minute. We have had such a crapshoot on finding good ones and more than likely you will end up finding really bad ones. It’s very frustrating to go to a store when you have employees who really don’t enjoy their jobs then who end up being the person who serves you. If you don’t like helping or serving others then you really shouldn’t be in a job that requires you to be involved with the public. Rhodes Family Price Chopper was a wonderful surprise. We found a staff of employees who were so sweet. This is about the friendliest store we’ve been to in a long time.

I had gone up to the deli counter to get some lunch meat and the the deli counter guy offered us some samples like they always do but what was different about this time was that he also suggested some cheese that would go with the meat. Now, I’m no dummy, I am pretty sure he was trying to sell me some but unlike so many other people who sell you stuff he wasn’t pushy at all. As we were standing there waiting for our meat to be finished being sliced, the lady in the bakery came up to us and offered cookies to the kids. She asked me first if they had any allergies and if they could even have some. As a mom, those are the kinds of things you appreciate. Nothing is worse than someone asking your kid if they want something and then you have to say no to them then listen to the crying fit for the whole rest of the time you are in the store, no thank you!

After we went to The Price Chopper we went to The Amish Country Store. Now this place has some great food in it. It also has some great gifts. I thought that the things here were made by the Amish but they aren’t which kind of makes me disappointed but it’s ok. We found tons of jam’s and jellies as well as tons of bulk snacks, spices, candy and so much more. Hal really likes Apple Butter so we found some for him. It was ok. It looked like applesauce jam. We also found some Mango jelly for Halim, which he liked but it was sugary than mango flavored. 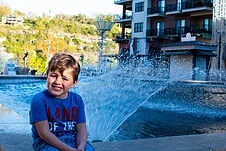 Hal got some of these great shots in Downtown Branson at the fountain. The boys sure know how to ham up when they want. Those boys sure are the cutest. 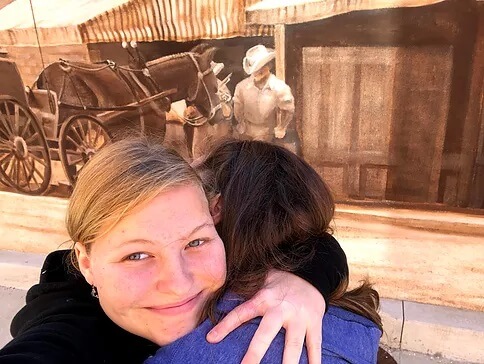 Alima and I got the joy of sharing some time together just wandering around the town by ourselves for a bit. It was so cool to find this mural on one of the ally’s so naturally Alima and I had to get a selfie at it. 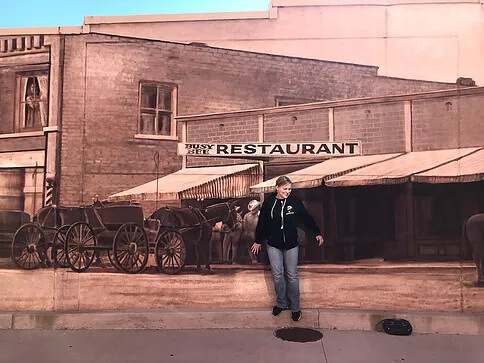 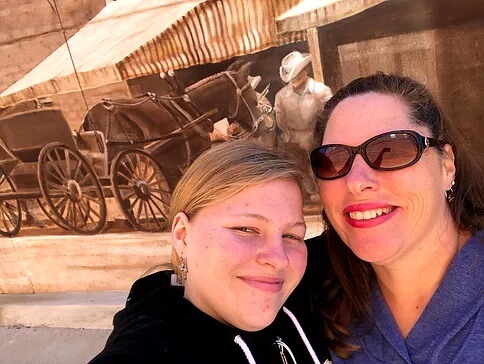 It was such a busy day, with lots of walking was in store for us when we went to Historic Downtown Branson. We went to so many cute shops. I think Alima and I loved the clothing boutiques the most. There were some typical mall stores as well but our favorites were the boutiques by far.

We went into a calendar, toy and game shop where we  found several great card games. I love card games when we are traveling because you can put them in an index card box and then you don’t have the bulky giant boxes that regular games are in and because they are put in the small box then you can stash many of them into a drawer or cupboard, win!

I don’t know if any of you have been to a Cinnabon, but I haven’t had a one in a super long time and I was not disappointed. It was such a huge sweet, frosting topped, and diabetes inducing treat! It was so sugary and more calories in one sitting than anyone should have, and a tastey-lisious tasty good cinnamon roll.

We were sad that we didn’t go to a show but we did enjoy just walking around the town. There is plenty to do here but we now know that we need to make sure we take time to do stuff the next time we are here. We got plenty of recommendations on which ones to see. There is tons for the adventurous type as well. We wanted to do more but we couldn’t because of my eye. We had to be careful that we didn’t jostle my body too much or go to high in elevation which stinks because it cuts out a ton of fun things to do.

This place is amazing! It’s a apart of the RPI Campground system. They offer so much here. It would be great to come back again. Amenities are ridiculous to even have a spa that is open from Friday through Sunday.😳😳 The only downside to being here is there is literally no Wi-Fi.

Amazing Wi-Fi.
The campground is huge.
The clubhouse also has a place where you can get tickets for all the shows that are in town. We are staying in Phase 2.
The campground really nicely kept, spots are decent sized. Not all of them have cement pads but there are cement and gravel. The electrical towers are color-coded to tell you which ones have 30 amp or 50 amp or both.
You know that campground is nice when you can tell your slightly germa-phobic husband that the bathrooms are immaculately clean. Restrooms were some of the cleanest ones I’ve seen yet.
We didn’t know it but there are handi-cap spaces so, we had to move because we accidentally got one of those. This park is super nice.
Wash in the laundry is $1.75 and the dry is .25 for 10 minutes restrooms were some of the cleanest ones I’ve seen yet. All of the grounds here are kept really really nice. the security people were really nice.