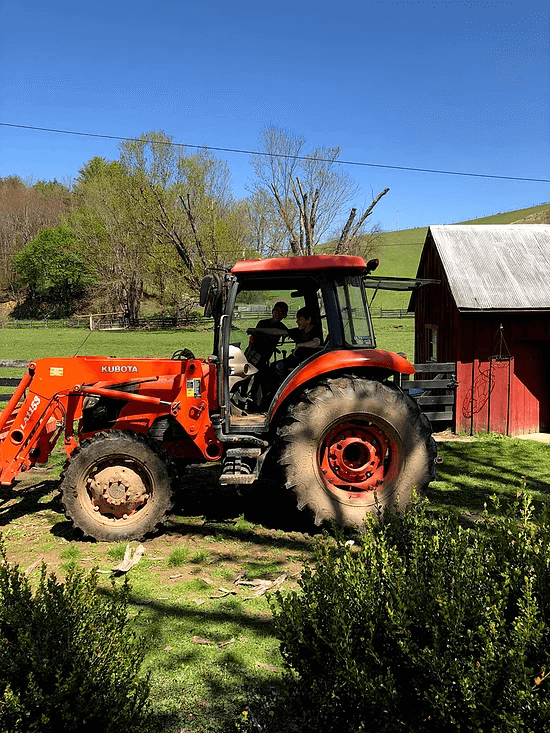 A few days later we went to My Shepherds Farm and fell in love. We went to the farm where we met Kelley and her amazing family. The  family raises beef, pork and chicken as well as man y different kinds of produce. The do it with n hormones or any antibiotics. Their animals are pasture raised. I love that they do things in such a natural way. I don’t believe God’s design for them were to be kept in small overcrowded pens and pumped with all kinds of junk to make them grow faster and bigger. I makes me sad.

They invited us to stay for lunch and  food had such a great flavor and texture. I did learn that you have to cook the natural chicken a little bit differently. It’s because they are able to roam around there is more muscle and less fat so if you aren’t careful in the way you cook it can get tough.

One thing I think that keeps people from having more natural raised produce and they think its more expensive. It is, sort of. When you think of the cost of handcrafted things, and that means not just food, it is more expensive because you aren’t just paying for something that was made in a factory but someone had to come up with it and create it. They had to spend many hours on that, also they spent a lot of time in the actual process of putting it together. It is their heart they poured into it and their time, sweat and tears. I personally think that we have strayed from valuing handcrafted things and been satisfied with the factory made things. It is no different when growing and raising food and that’s why hand crafted costs more, but if more people demanded it then the price would go down and it would be less expensive.

We have talked about homesteading and building our own farm from scratch. We were driving to the farm and just before we turned onto the road to the farm Halim asked if we were going to have a ranch and that he was hoping we would. We said that was the hope and dream. He said that he hoped we would get some pigs, I said,”uh no.” I said that because we had a neighbor that had one and it was not kept the way they are supposed to be. So i had no intention of getting one, but after watching and seeing how they care for their animals at My Shepherd’s Farm, my mind has been changed. 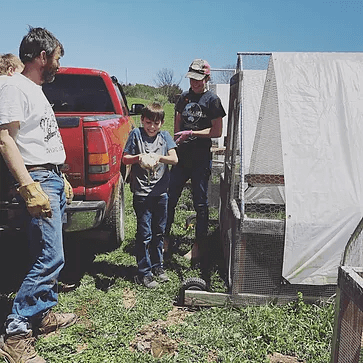 I have never seen my kids respond to anything like these kids did. They were in heaven. We went there because we were helping them move their chicks to the chicken tractors in their pasture. Philip was so sweet and gentle but firm in giving the kids instructions on how to handle the chicks. It was amazing to see Halim step up and WANT to help. He jumped right in and was handed some chicks and set them in the truck bed then went back to get anther one.

He was a little afraid when they flapped their wings but he stuck to it. He helped with a lot of chicks. Steven and Calvin jumped on the trampoline and ran all over. They were afraid of the Tom turkey that followed them but they did like the chickens. The kids loved riding on the back of the pick up truck and playing in the grass. 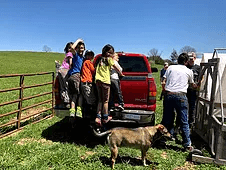 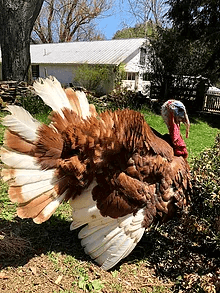 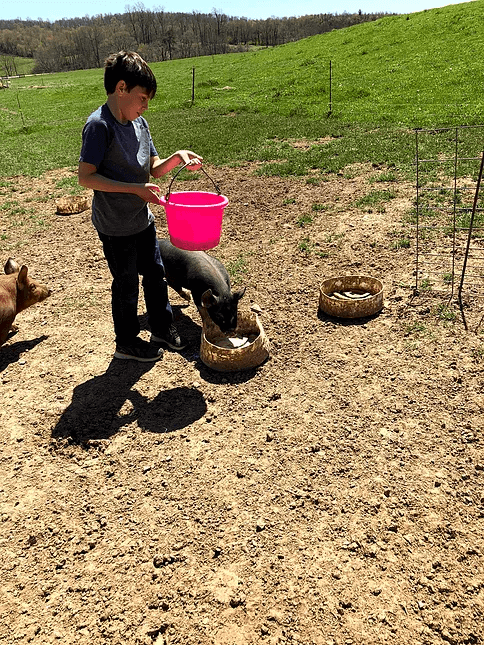 Watching the kids reminded me of how much I, in a way, hold my kids back and hamper their desire to explore and learn. I realized that as I was watching them follow Philips directions and carry them out without question. I was nervous about letting the littles help with stuff but Philip said, they can do this. And after watching them as they carried out his directions I learned they can do stuff. They can do things that I don’t think they can. I just need to give them the opportunity to do it. I also realized if they make a mistake then what? They made a mistake, so what? What is it going to hurt? Nothing absolutely nothing. They make the mistake and then we fix it and move on. No harm done. Also I learned the older kids can be given a direction and get it done. I think I’m kinda like Nemo’s dad in Finding Nemo. Halim is the king of dawdling but Philip asked Halim if he w

anted to give the piglets some milk and he was so excited. He did great at getting the bucket, taking it to the pigs and feeding them. He was in his happy place. 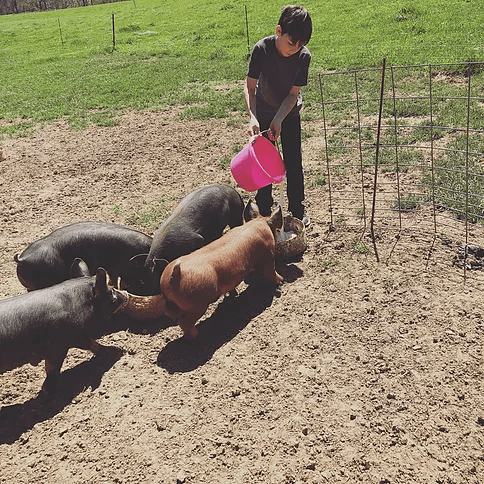 The kids and I drove the Blue Ridge Parkway one day while Hal was working and it was amazing. The views were breathtaking. There a lot of woods but then it opened up to lots of pasture land that was dotted with herds of Black Angus cattle. That is a must do if you can. There are lots of pull offs so you can get great pictures the area.

So then we got infested with ants. That was a disaster. First there were only a few and we just squished them but then they came with all their friends. We opened one of the storage compartments looking for them and we saw them carrying their eggs and that’s when we knew we were in trouble and they were creating a nest. I went out and got some diatomaceous earth and some spray. I also got some bait traps and after deep cleaning all the storage compartments and everywhere we think we have finally won the battle on the ants. As we were cleaning the whole place we decided Gilly and The White top needed a bath. So the kids and I scrubbed the outside so Hal could reseal all the windows, edges and compartments. Thankfully after working 2 days we got it done.
Hal and the kids went to City Rock Fest and they had a blast. Some of the bands were Seventh Day Slumber, Disciple, Wolves at the Gate, As We Ascend and a few others. They had so much fun. They went to the meet and greet. They really liked being able to talk to the band members. Alima is a huge fan of the rock style Christian music so she was in heaven. They gave the kids some awesome merchandise and a CD which Alima put in the truck the minute she got it. The littles and I stayed home. I knew that was not going to be their thing and I was right.
Halim went to a table that had children that you could sponsor from Child Fund. He is so excited to write letters to the boy that they chose.

So now we are back on the road and heading to Harbor View in Colonial Beach, Virginia. It has finally warmed up and Steven and I went and looked at the stars. I cant get over how dark it is at night. It’s really dark. But I kinda like it because it tells me that there aren’t a lot of people around and there is a peacefulness and stillness in the dark. There are sooo many stars and they are so bright. It’s just something that you don’t see in the city very much. Don’t get me wrong it is kinda creepy too but then I see the warm glow of our outside light and I feel safe.