This park we stayed over for 1 night. There was a lake and it was green but was still bitter cold. We were not prepared at all for how cold it was. So we bundled up in blankets and kept the heat going. Our pipes froze over night so we had to wait for them to unfreeze before we could leave. We used a hair dryer to thaw them out. Haha.

FYI the roads in Louisiana are horrid and filled with so many DEEP potholes it was like driving on the face of moon.

We left here and went to the Duck Commander Store in Monroe, Louisiana. It was ok. There was a lot of stuff to look at. They had Si’s Tupperware cups so we got a few of those. Someone had carved a huge statue of Willie. Steven liked that. There was also some cool art work someone had made of the family.  there was also the obvious duck calls and other game calls as well as instructional videos and such for the hunter. 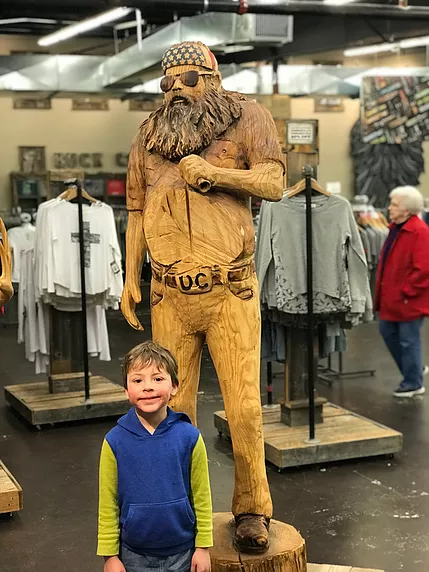 The restrooms were gross and I had to do laundry and those facilities were ok at best. The laundry wasn’t expensive. I think it was $1.25 to wash and $1.50 to dry. Not bad. They seemed to have spots that were fairly spaced out. I don’t think I would stay here if I had to use their restrooms.

They did have a swimming pool.